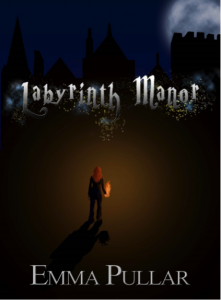 LABYRINTH MANOR is the first book in a series entitled “THE ENCHANTERS”. The book is set in the present and the main protagonists are Emberley Edge and Raine Ravenhall. Ember is fourteen, Raine is sixteen and they are both Argents. Argents are people who possess “natural” or “soft” magic, which is used for good, even though its use has been criminalised by the government, called The Council. It has been criminalised because of “dirty” or “hard” magic, to which people become addicted and use for evil purposes. The Council, however, makes no distinction between “soft” and “hard” magic.

Emberley is a bit of a misfit and hasn’t fully mastered her abilities as a “fire” Argent. Raine is more skilled as a “water” Argent. He knew of his abilities as a child and mastered them, while Ember was unaware she had any natural magic, apart from setting fire to her mother and to her boarding school. Labyrinth Manor begins with Emberley escaping from a detention centre for “magicals”, before they’re sent to a place called Argent Rock to be “cleansed” – which involves mind-altering therapy.

Emberley makes her way to a refuge, run by Avior, an elderly mentor and an activist and advocate for decriminalising “natural” magic. However, she’s being pursued by a Hunter – haft human and half machine – which sucks out the brains of escapees. In the ensuing turmoil, two government CEA agents get killed and Avior dematerialises. Emberley escapes by drinking a vial of “Blind-Eye”, which makes her temporarily undetectable to the Hunter.

The popular media depicts Argents as dangerous criminals who must be removed from society and cleansed – and now Emberley is being blamed for the deaths of the CEA agents as well. Before she dematerialised, Avior gave her a hologram map, with directions to Labyrinth Manor. Labyrinth Manor is a secret retreat where Argents can perfect their skills and stay out of the clutches of the government – and addicts can be rehabilitated from “dirty” magic to “soft” magic.

Emberley meets Raine at Labyrinth Manor, as she learns how to control her abilities with the help of a “gauntlet”, which can be activated from within the Argent’s hand. Sightera, the Hunter who came after Emberley, manages to find Labyrinth Manor and gains access. Emberley and Raine form an alliance with a group of other young Argents, aged from twelve to sixteen, to combat Sightera. They learn of a magical instrument hidden somewhere in Labyrinth Manor that can turn time backwards and forwards. Sightera is also after this, as time manipulation devices are rare and highly sought after.

Sightera has very strong powers of her own and combating her leads to situations of high tension – a roller-coaster ride of defeats and victories, undulating at high speed through the dark labyrinth beneath the manor, full of strange creatures and dangerous trajectories. Gradually, the other Argents are immobilised and Emberley is left to face the deadly Sightera alone. Emberley emerges victorious and she’s hailed as a hero. But there are more Hunters out there and Emberley and Raine can’t hide in Labyrinth Manor forever.