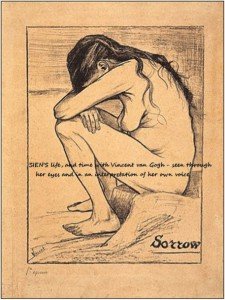 “Sorrow” is an ‘imagined’ autobiography, written in 1st person and from the point-of-view of Clasina Maria Hoornik, the prostitute who was mistress and model to Vincent van Gogh. The book is titled after the iconic drawing of Sien (as Van Gogh called her).

Despite their poverty-stricken and volatile relationship, Van Gogh loved Sien and she loved him. They were two outcasts, adrift in a turbulent sea of uncertainty. They found each other and gave each other something to cling onto – a tenuous lifeline – until they were ripped apart and went under, to drown in the trauma of life without each other.

Sien was a huge influence on Van Gogh’s early work. She gave him a sense of humanity and an affinity with the poor working people he drew and painted. Vincent sketched her over fifty times, in many guises – as worker, companion, mother and lover – and some of his sketches capture her sense of forlornness and abandonment, none more so than the drawing “Sorrow”.

Van Gogh wanted to marry Sien, to give her some kind of security – and she wanted to marry him, to give him a sense of family life that he craved. Vincent took care of and loved Sien’s children as if they were his own. In fact, there is some speculation that Van Gogh was the father of her son. They desperately longed to remain together, but this could never be and the couple were forced to part, only to be haunted by the memory of their love until they both committed suicide.

Vincent and Sien is one of the greatest love stories never told – until now! We’ve heard Van Gogh’s voice through his letters to his brother Theo – now it’s Sien’s turn to tell her story.

There are many known facts about Sien’s life, and these are all included in the book. In that respect, it is totally factual and authentic. Her feelings and emotions are also represented as authentically as possible by a variety of contemporary sources and Van Gogh’s own letters, in which he speaks of Sien on many occasions.