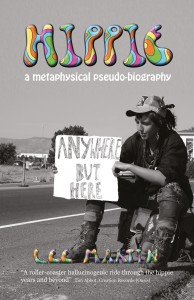 Buy direct, special offer of £7.99 from – www.thehippiebook.com
Available as an ebookon Amazon

Hippie is a book on two levels.

Firstly, it’s a history of the hippie phenomenon, from its origins in the Beat Generation of the 1950s, through to its survival today in the form of New-Agers and post New-Agers, environmentalists, alternative lifestyle enthusiasts and spiritualists. It traces the life of one particular hippie on a journey from the Haight-Ashbury area of San Francisco in the 1960s to New York during the Summer of Love and then to Woodstock in 1969.

The biography comes back to England at the end of that decade and the story resumes in the UK of the 1970s and 1980s. It narrates the history of the free festivals like Windsor and Stonehenge and the brutality Hippies faced from the establishment and a rabid tabloid press. The book touches on Greenham Common and the Peace Movement, before taking to the Hippie Trail and trekking to India and Nepal. The pseudo-biographer suffers personal loss on the way back and experiments within a commune as a way to deal with this trauma. He eventually goes back on the road in a horse-drawn vardo before organising his own music festival in Gloucestershire.

On a second level, the book delves into the metaphysical philosophy of the hippie culture, at first using hallucinogenic drugs, but eventually experiencing enlightenment through understanding. This element of the story may be difficult for non-hippie readers to grasp – but here’s a simple step-by-step guide to its meaning.

But if you get it, you’ll be taken on a roller-coaster, hallucinogenic ride that you’ll never forget!