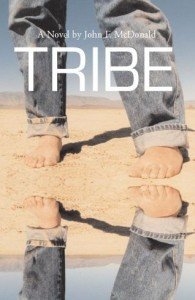 TRIBE is the story of a year in the life of a semi-domesticated Gypsy – Owen McBride. Owen still works with his itinerant ‘cousins’, breaking and selling horses, even though his Gorgio girlfriend, Ann, wants to drag him into the settled post-millennium mainstream euro-life, with house, car, tie and ‘steady’ job. He is reluctant to cut the final thread with the disappearing Gypsy world – the hard and discriminated-against life of Romanys, Tinkers, Gypsies and Travellers. This world is described accurately and authentically in TRIBE and the attitudes and humour of these colourful people are explored without compromise.

The novel also enters the deeper waters of identity, as Owen stands with one foot in the Gypsy world and the other in the Gorgio world and struggles to decide what he really is. He doesn’t seem to belong in either world and circumstances continue to intervene, to make the inevitable decision even more difficult. Owen and his demolition-man friend, O’Connell botch a robbery for a group of dangerous gangsters and that’s when the trouble really begins. The problems and passions caused are explored in a serious, yet blackly comic mood and the main characters’ skirmishes with this menacing Gorgio underworld are vividly painted.

After falling foul of the Gorgio gangsters, O’Connell is murdered and Owen is forced to hide out with the Gypsies and begins to feel at home with them, breaking horses and hunting and eating hedgehog by blazing campfires. He meets Tolui, a Mongolian horse-breaker and philosopher, who teaches him how to accept who he really is. But this life is not to last. The Gypsies eventually move on, as they inevitably must, leaving Owen alone again. He must resolve his problems with the gangsters and he does this with the help of Mad Mary, a homicidal middle-aged woman with a grudge to settle.

Owen also has a brief affair with a Romany Gypsy woman, Litzy, who’s married to a bare-knuckle fighter, Felix. Litzy is so remorseful about her one-night stand with Owen, she attempts suicide and her husband is looking for the culprit, to kill him. Owen manages to convince Felix that it was the gangsters who caused Litzy’s attempted suicide and Felix takes his revenge out on them.

When the dust settles, Owen has had enough. He knows when he’s beaten and he makes a decision – he’s been left a house in the will of his close friend, O’Connell and he and Ann plan to move in and become a normal, settled couple.

Tribe illustrates the conflict at the meeting point between the commercial culture of high technology and the dying life-style of a people now almost extinct.

The book is fast, provocative and written with a brisk dialogue bias which has converted effortlessly to screenplay format.