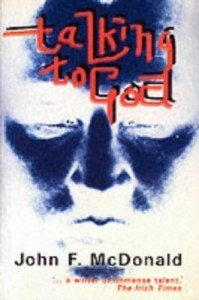 Nobody knows what causes Schizophrenia. Modern psychiatric methods are improving all
the time, but we are still in the dark ages when it comes to understanding, diagnosing and
treating this disease. What is known is that the disease affects one in every hundred people
throughout the world. It is a greatly neglected illness whose devastating effects swamp
millions in misery.

Schizophrenia is not a single condition, but rather a wide group of conditions under one
umbrella title. No two schizophrenics experience exactly the same symptoms and the disease
can range from mild to chronic. In some sufferers, it is never detected at all. The symptoms
described in Talking to God are genuine and accurately painted. I have used material from
The National Schizophrenia Fellowship and The Schizophrenia Association of Great Britain
in my research of the subject, along with books and articles by leading psychiatrists in the
field and by families of schizophrenics and schizophrenics themselves.

Talking to God allows the reader through a door – into the mind of one fictitious
schizophrenic, Francis Page. His experiences are not everybody’s, but they are authentic
nonetheless. Francis is a 40 year-old London doorman. He is nearing the end of his shelf-life
in the bouncing game and he wants to make some real money before he retires. Francis is
unhappily married with two daughters. He also has a black girlfriend who is HIV positive.
Things go downhill for Francis, his wife leaves him and his plans to make money come to
nothing. Francis is eventually tempted by Yardies into smuggling drugs to make his nest-egg.

Francis gets caught and sent to prison, where his violence is misunderstood and treated with
strong tranquillisers and neuroleptic drugs. He kills a warder and is eventually sent to
Broadmoor Secure Psychiatric Hospital where he is kept on a high drugs regimen. Francis
escapes from Broadmoor and finds out that his eldest daughter, Fiona, has become an addict
and his girlfriend, Glendora, has been murdered. Francis goes on a revenge spree, killing
everybody he believes responsible, whether they are or not. He is spoken to by many ‘voices’
who tell him contradicting things. He can’t make sense of it all and eventually he commits
suicide.

The main theme takes a harrowing, yet sympathetic and realistic look at the way
schizophrenia affects the lead character, Francis Page, and how society views and treats
someone in his situation. It is both topical and controversial and paints a surreal picture, full
of strange landscapes which are alien to most individuals, but which are a very real part of the
human condition.

The novel is set in the club-land world of London doormen, gangsters and ‘tough guys’, as
well as New York and Amsterdam. The language of this world is strong and
uncompromising and the characters observed at first hand.