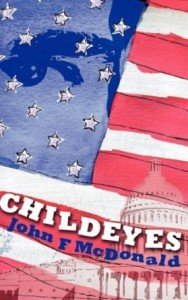 BUY NOW – FROM THE BOOK DEPOSITORY

BUY NOW – FROM BARNES AND NOBLE

Maximilian Moeran is an American Senator in Washington DC. He’s ambitious and intends
to run for the White House. He’s also a crook, a womanizer and an ex American-Football
star. Maximilian is a popular man with the people and his colorful character and reputation
for rubbing shoulders with lesser mortals antagonizes his political-insider peers. He’s street-
wise, charming, calculating and totally without scruples. He also has a sexual affair with
Esmé, a young girl of school age and this is the only thing that troubles his conscience.

The action of the book is set around Maximilian’s political agenda, which includes getting
Congress to pass a bill giving genetic engineering to the masses – a Congressional sub-
committee debating putting wild animals back into selected areas of national parkland to
combat the menace of an uncontrolled and growing population of insects – and the China
crisis, where China is rapidly becoming the world’s greatest superpower with the US in
decline – issues which are realistic enough.

Just before the Presidential election, Maximilian escapes from his secret service ‘minders’ to
attend a football game with a couple of corporate hosts. After the game, Maximilian stays
behind in the stadium. He takes a nostalgic walk down to the touch-line and out onto the
field-of-play. Right out to a black circle at the very centre of the 50yard line. The stadium
lights go off and Maximilian is alone in the dark.

Then something very strange happens to Maximilian Moeran – out there on the field – at the
circle in the middle of the 50yard line. He encounters himself – who he really is – what he
really is. When he returns, Max is a changed man.

Maximilian becomes completely honest – he understands more than he’s ever understood
before – sees beyond his humanity. He tries to impart some of his new childlike candidness
to the political community in DC. They don’t understand. He’s frustrated by the attitudes of
those close to him and tries to spread his knowledge further afield through the media.

Maximilian is believed to be having a nervous breakdown. He fails to win the Presidential
election and his political career goes up in smoke. He admits his affair with Esmé and is
viewed as a dangerous eccentric, if not a criminal. Charges are brought and nobody wants to
be associated with him. His wife leaves and his children boycott him. Despite the fact that
Maximilian is a far better person than before, everybody preferred the old Maximilian and
shuns the new one.

Maximilian becomes an outcast and a recluse, living on a remote estate in West Virginia.
Esmé eventually comes to see him, seeking some kind of redress for the innocence he took
from her. She is older now and after they communicate, Max reverts to his old self again.

History repeats itself and Maximilian, this time, does become President – only to die at the
inaugural ball.

Childeyes is more than a satirical look at politics in America. The book incorporates several
themes and asks some big questions – all set against the background of American politics and
the insider-culture of the most political and media-obsessed town of them all – DC. The
world of Washington DC insiders has similar charisma and popular appeal to the world of
Hollywood stars, though as yet fairly untapped in literary terms.
But ultimately, the book is about our concepts of good and bad – and guilt. It also takes an
honest and objective look at human relationships – the Lolitaesque affair between Maximilian
and Esmé is controversial and taboo-breaking, but it is also treated sensitively and without
hysteria.