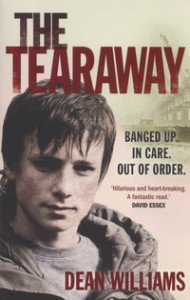 “Dean Williams was born into the tough Scartho area of Grimsby in 1972. His father was a violent, hard-drinking trawlerman who spent most of the year at sea and his shore time drinking and fighting. Obsessed with making young Dean ‘man up’, Bob beat him and locked him in a cupboard under the stairs for days on end. Dean’s mother, Andrea, did her best, but was also terrorised by Bob Williams. From the age of seven Dean was known locally as ‘the spike thrower’, for accidentally impaling the head of a young tormentor with part of a bicycle. The aftermath was a wayward teenage life, expulsion from school and notoriety through football hooliganism. But there were also times when Dean’s childhood captured echoes of a simpler way of life, playing out until dusk, catching newts and nicking gobstoppers. This astonishing memoir, although touched by darkness and violence, is infused with the sharpest humour. It has the atmosphere of a David Peace novel colliding with a Shane Meadows film. Like a cutting-edge, nouveau Dead Man’s Shoes, or a Somebody Up There Likes Me for the 21st Century, it is an uncompromising account of a life lived on the margins and the power of the creative spirit.”