The Boy from Treacle Bumstead 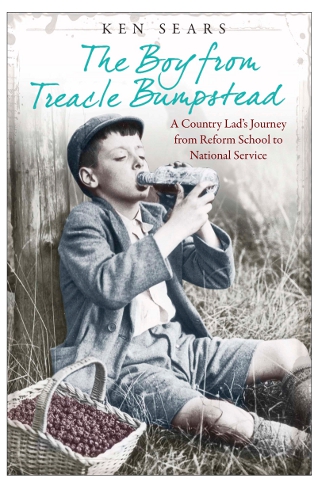 
BUY NOW – FROM THE BOOK DEPOSITORY

“This brilliantly written memoir takes the reader on a journey into the past, to a rural England long gone, when horses worked the fields and small boys spent most of their time outdoors. Ken Sears was born in 1934 to a poor farming family in Hertfordshire – the fifth child of what would be eleven. He learns how to fend for himself at an early age. His boyhood life coincides with wartime, evacuees and American GIs arriving in his home town of Hemel Hempstead (the ‘Treacle Bumstead’ of the title). At the age of nine he is caught stealing eggs and accused of killing a chicken (which he denies to this day) and is sent to reform school for five years. So begins a punishing existence, but it breeds a tough teenager, and after learning the trade of bricklaying he is called up to do his National Service in 1952.

So begins his adventures in the Army, in Europe and Korea, where the ever-plucky Ken – who has an eye for the ladies and is always landing himself in trouble – finds not-always legal ways to make life that bit easier. After the Army he comes back to England and sets up a building business. From there he sees his home town change out of all recognition. The story is a characterful testament to the resourceful generation of the men who did National Service, fought wars, built towns and stood up to everything in their way. Ken’s story reads like ‘Commando Comics meets Fred Dibnah’.”