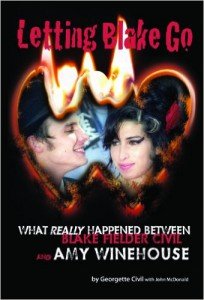 “Letting Blake Go” is a memoir or exposé, rather than a full biography, per se, covering the period from 2006 (and before) to the present day. The voice in the book is Georgette’s, telling her side of the Blake Fielder-Civil / Amy Winehouse story, and how it has affected her as a mother, a wife and a human being.

The book consists of hitherto unknown facts about Georgette’s relationship with Blake, Amy, Mitch Winehouse and other people who have had a role to play in the saga that has unfolded itself very publicly. Blake’s early life with his natural father is also commented on, including experiences which may have contributed to his drug addiction.

The book begins with Amy’s death in 2011, while Blake was in prison. The phone call to Georgette, telling her about Amy’s death, reminded her of another devastating phone call, four years earlier – a call that was to change Georgette’s life irrevocably. That call, from Amy, brought news of Blake’s arrest on conspiracy charges – charges that were to send him to prison for two and a half years, without remission, because he insisted on shouldering the blame for everyone concerned.

Eventually, that call would culminate in driving Georgette to despair and, to get some respite and be able to sleep at night, reduce her to planning the suicide of herself and her three sons. That suicide pact was eventually abandoned by Georgette, mainly due to Blake’s unshakable support for his mother and his determined optimism in the face of impossible odds.
“Letting Blake Go” tells about Georgette’s encounters with drug-dealers, it reveals who was supplying Blake and Amy with heroin and crack cocaine, who was supplying Amy while Blake was in prison and the full truth about the conspiracy charges.

Blake’s trial and incarceration were deeply traumatic for Georgette – his time in Pentonville, including covert visits from Amy, where his drug habit was fuelled – his transfer to LifeWorks in Surrey, where he was victimised and from where Georgette helped him to abscond – his return to Pentonville, where he spent three months in solitary confinement – his transfer to Edmunds Hill and eventual move to Sheffield.

Georgette tells how Blake obtained drugs while he was in prison and explains, but does not try to justify, how and why she and Amy played their part in that process. She also writes about her pain and humiliation at the hands of the tabloids and the residents of Claypole, Newark, the village where she lived, and her eventual breakup with her husband, Giles Civil.
The book illustrates the lasting effects these experiences have had on Georgette, on Blake, and on the other members of the Civil family and how, even with Blake’s release and her new-found psychic “life” of angels and the spirit-world, Georgette’s nightmare still wasn’t over. Blake and Amy got together again after his release, but the self-destruct buttons were still being pushed. Blake eventually ended up back in prison having been convicted of burglary and firearms charges and Amy’s career and personal life spiralled downwards, with drunken appearances on stage and cancelled concerts.

The book ends where it began, with Amy’s death and the uncertainty of Blake’s future. Will he eventually follow the love of his life to an early grave? Georgette thinks this is a definite possibility.

As well as a book for all Amy Winehouse fans throughout the world, the book is must reading for mothers of drug-addicted siblings, everywhere.